Shoal of knitted herring to be sold to raise funds

A shoal of herring knitted in a ‘lockdown spirit’ for an exhibition at the Old Low Light Heritage Centre, North Shields Fish Quay is being sold to raise much needed funds. 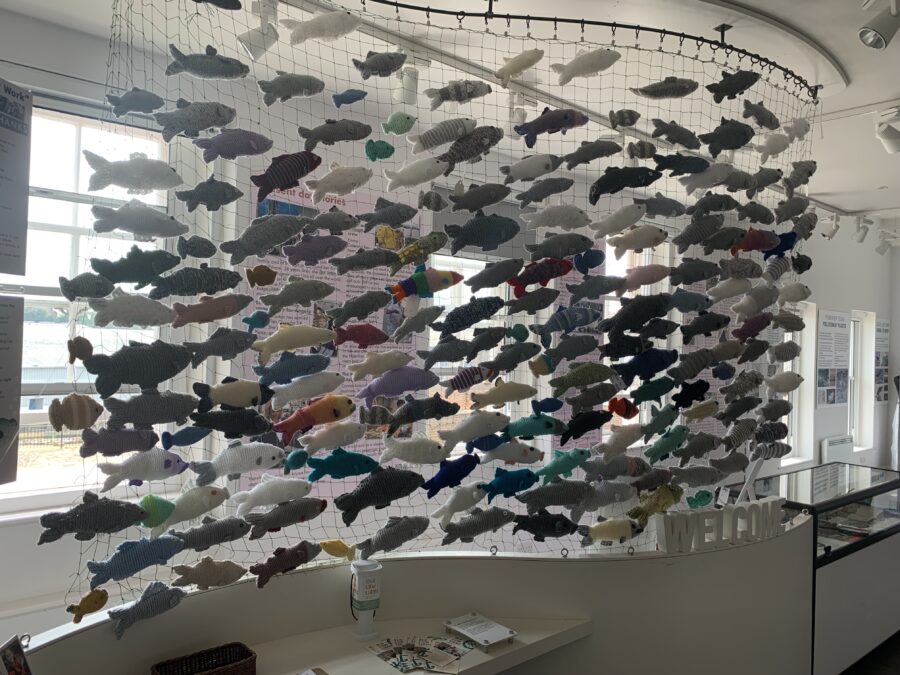 The fish have been part of a popular exhibition ‘That’s Women’s Work’ about the changing roles of women in fishing and maritime industries over the past 150 years.

When the exhibition ended last week, it was decided to sell the fish to raise money for the centre. Donations of at least £2 per fish are being asked for.

Nina Brown, a trustee and volunteer at the Old Low Light, who coordinated the exhibition, said: “The fish were knitted by local people and Old Low Light volunteers in a ‘lock-down spirit’. We were touched to hear people say that knitting the fish gave them the chance to support a community effort during a difficult time.

“Overall, they provided a wow factor, with visitors to the gallery smiling when they walked in and saw them hanging from an original herring net. And now, after nine months on display, we’re selling them to raise much needed funds for the heritage centre which like other venues has suffered financially due to periods of closure and restrictions over the past two years.”

The idea to have a knitted fish display came from the Scottish Fisheries Museum in Anstruther.

Nina continued: “When we were planning the exhibition, we asked people through social media if they would like to help us by knitting herring. At the time the centre was closed and when the gallery re-opened last July, it was heartening to have a stream of people coming in – some came with a bag full, others brought one or two. After a few days we were delighted to have about 100 attached to the net. However, the fish kept coming and before long our shoal expanded to about 250.”

Although a pattern was provided, the fish were personalised by the knitters. The shoal included an array of colours, some were glittery, some were multi-coloured, and some were knitted using recycled plastic bags.

The Old Low Light Heritage Centre is open Tuesday to Saturday from 10am to 3pm.