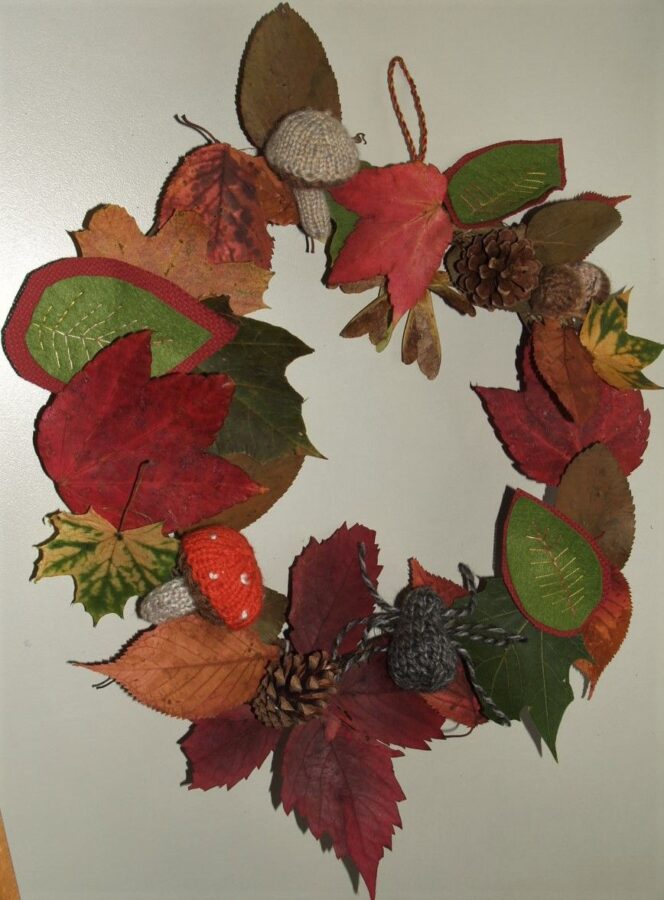 A range of crafts including crochet, gansey knitting, sewing, quilting, willow weaving, lino printing and sea glass items will be on display at the centre on North Shields Fish Quay on Saturday 11 December from 10am to 3pm As well as demonstrating their crafts, some of those taking part will have items for sale. Entry is free.

The display is part of a programme of events related to the centre’s current exhibition “That’s Women’s Work” about the important role of women in fishing and maritime industries over time. Some of the crafters have supported the exhibition by providing items to display in the gallery, including in the Cabinet of Curiosities.

The event will include the following:

Crochet – Dorothy Brownlee, a founding trustee and active volunteer at the Old Low Light will demonstrate the delicate art of crocheting. She will also have some items for sale. An experienced crocheter, Dorothy has previously organised workshops at the Old Low Light and has provided crocheted garments for some of the centre’s exhibitions, including a fisherwoman’s shawl currently on display as part of the “That’s Women’s Work” exhibition. Some of her crocheted poppies were recently included in a display on the railings outside the centre for the annual Remembrance Tribute, which she coordinates with other volunteers.

Gansey knitting – Blyth Tall Ship volunteers, Astrid Adams and Janice Snowball, will demonstrate gansey knitting and will display some that were knitted as part of the Williams Gansey Project, along with hats, scarves, socks and fingerless gloves and the patterns used. They will also have some items for sale, including their recently published book ‘It Started with a Stitch’ about the project, as well as knitting patterns.

The project was set up in 2016 to provide ganseys for crew members of a planned voyage on the 100-year-old Blyth Tall Ship (Williams II) to Antarctica to replicate an expedition 200 years ago from Blyth by Captain William Smith. An appeal for gansey knitters resulted in 600 responses from all over the world. It was later decided that the Williams II was not robust enough for such a journey and the ganseys were provided to 110 crew members who instead took part in ten legs of the Round Britain Trials.

Astrid and Janice researched the background of the gansey, which for hundreds of years was the main garment for fishermen and seamen on lengthy voyages. There was no record of a ‘Blyth gansey’ so they created their own pattern, incorporating the Northumberland flag and the Blyth Tall Ship logo. They also designed patterns for hats, scarves and fingerless gloves.

Sewing – Members of SEW NE29 – sewing for self, others and the environment – will be demonstrating their craft and promoting their group.

The group is dedicated to all forms of sewing for health, wellbeing, self-expression, sharing skills and exploring the full range of stitch from embroidery to leather work.

They believe that sewing is about attaching threads, and there is no need to limit how they do this, so their work is inclusive of many styles covering both art and craft.

The group meets monthly at Christ Church Parish Centre, North Shields NE29 0LW from 2-4pm.  They charge £5 per session and are a supportive group who share resources, and skills and are committed to recycling and raising awareness about environmental issues, in relation to their stitching.  They welcome new people and hope that people find the group warm, inviting, and supportive.  The venue has good accessibility.  To find out more, please contact them on sewne29@gmail.com.

Their work is well known in the region. They made the copy of Joe the Quilter’s Quilt for Beamish Museum. Most Sundays in happier times Aidan could be found quilting in Joe the Quilter’s Cottage at Beamish Museum.  This year they designed a quilted cushion for The Bowes Museum to support its current exhibition, North Country Quilts, which is celebrating the quilting traditions of northern England. The exhibition, which is open until 9 January 2022, is showcasing historical and contemporary quilts that are among the finest examples of the craft acquired by the museum in the last 20 years.

Willow weaving – Lorraine Griffiths and another member of the Cullercoats Self-help Basketry Group will demonstrate weaving simple items using willow. They will also bring along some of their baskets and other items to show what is possible using willow and will have some small items for sale.

Sea Glass – Old Low Light member Beverley Swinburne will be demonstrating sea glass crafting and she will have some pieces for sale. She will also have a selection of monoprint cards with prints of leaves and grasses.

Beverley took up sea glass crafting a few years ago after watching a demonstration in Whitley Bay. Within a day she was on the beach looking for sea glass.

During her working life, as a child minder, she did a lot of crafting, but this was the first time she had worked with sea glass.

At first, she started making medallion sized pieces but since then her work has evolved to include trees and fish. She says the way people use her pieces is subjective. She thought the items would be ideal as window hangers, but people use them in different ways, including sometimes as Christmas tree decorations.

Some of Beverley’s sea glass pieces can be bought in the shop at the Old Low Light. Her work is also on sale at Curiosity Corner, Amble.

Lino Printing – Anne Proctor will demonstrate lino cutting and hand-print proofs of lino prints. She will also have a range of prints on sale.

Anne, who comes from Newcastle, has always drawn and painted, studying graphic design at Newcastle Polytechnic in the 1970s, where she was introduced to print making. In the early 1980s she was a graphic designer at the Hancock Museum, making display case paintings and three-dimensional settings in the bird and geology galleries. Throughout the 20 years she worked in another sector, she continued producing art. Since 2007 she has been printmaking full-time, now producing her etched plates, lino blocks and collograph plates in her own studio.

She has a stall at Tynemouth Station every Sunday and her work is also on sale in the Old Low Light shop.